Carbon Share returns the value created by a cap on greenhouse gas emissions back to residents.

The goal of Carbon Share is to address climate change by setting a cap on greenhouse gas emissions and returning the value created by this new scarcity back to consumers to compensate them for the increased costs of fuel and electricity. 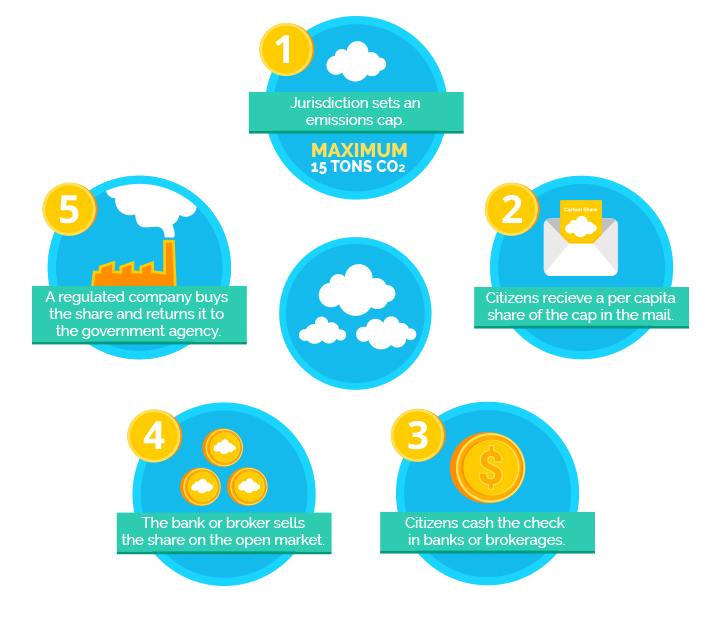 WHAT IS BEING REGULATED: CARBON EMISSIONS FROM FOSSIL FUEL USE

A Carbon Share system sets a cap on fossil fuels (at the point of extraction or import, known as “upstream”).

HOW EMISSIONS ARE REGULATED AND CAPPED

Climate change is a global problem, but local jurisdictions can set local emission reduction targets and adopt a climate action plan. Implementation of the plan may include a price on carbon and a Carbon Share system. It is important for jurisdictions is to define the boundaries of their cap and how fossil fuels are treated as they cross those boundaries in order to prevent “leakage” (emitters moving to a nearby unregulated state).

Once a cap is set, the allowances under the cap become valuable. Corporations and utilities will lobby legislators for free allowances. Elected officials will be tempted to spend the proceeds from the sale of allowances on projects. Lobbyists for environmental groups will propose uses for the proceeds other than returning the money back to people. Carbon Share can assist your community in advocating for funds to be returned to the people.

Two approaches to consumer compensation are dividends and shares.

In a dividend program, the government sells (auctions) the rights to the highest bidder, then uses the proceeds to provide cash dividends to consumers on a per capita basis.  Advocates often refer to these programs as Cap & Dividend or Fee & Dividend.

The dividend could be disbursed electronically, wired to your bank account, put on a debit card, or issued the “old fashioned way” through a check.  Another possibility is to receive the share as a tax rebate.

The Alaska Permanent Fund is a well-known example of a functioning resource dividends program.. The State of Alaska distributes proceeds from leasing state land to oil companies by wiring the money directly to the individual’s bank account, or by mailing a check.

If shares were distributed instead of dividends, they would be denominated in CO2, and could also be disbursed electronically into accounts held by individuals, to be sold by them at a later date through online transactions to the upstream fossil fuel companies that are required to have a number equal to their fossil fuel production or imports.  Such a carbon market would allow everyone to participate in the selling of Shares, and could include other private sector entities such as brokers or aggregators.  Some households might prefer not to sell their Share, and allow it to appreciate over time, or to withhold the sale in order to reduce emissions.  If the government needs to stabilize the market, they could require that a certain minimum number of Shares are sold over time to avoid price spikes, and that money would be used for public trust projects, etc.

The Commons: The distribution of per capita rebate, dividend, or share goes beyond the idea of mitigating the impact or burden of changing to a low-carbon economy to specific groups. The per capita framework institutionalizes the idea that we all share ownership of the commons together, and that wealth should be shared with everyone. It enshrines inclusiveness and equality, some of America’s highest values, into our economy. This is why dividends or shares to middle-income and high-income Americans is not wasted. It is based on the idea that the rights to use the atmosphere belongs to all people, equally, not to emitters or the government.  Consumer compensation may be key to maintain political support for the cap over time.

Why per capita: Equal per capita compensation addresses the regressive impacts of fuel price increases. If consumers are compensated on a per capita basis, this would help low-income consumers, since they spend a greater portion of their income on fuel and electricity. This is the economic justice component of consumer compensation. Additionally, low-emitting individuals from all income groups will come out ahead at the end of the year, but high-emitting individuals will pay more than they receive.

If there is going to be a carbon market, it is in everyone’s best interest to have a market that values the environment and the public trust.

A well-designed carbon price can provide incentives throughout the economy for behavior that reduces carbon, while recycling revenue to people. Governments can create a mandatory cap on the emissions that cause climate change, and return the value of permits under the cap back to households.

What is Wrong With Other Systems:

“Cap and Trade” can come in many forms. Some cap and trade systems give away permits to wealthy corporations, while others charge polluters for permits. The details of how the system is structured are the key to who supports the system and who opposes it. A main concern is who gets the emission rights, and how the revenues (or allowance value) is spent.

Many proponents of a cap and trade system point to the EPA’s Acid Rain program (SO2) which used cap and trade. The South Coast Air District used a similar model for their RECLAIM program, and later in 2005, the European Emissions Trading System (ETS) followed the same design principles.

Unfortunately, there are flaws in these systems. The SO2 market achieved reductions, but not necessarily faster or cheaper than a regulatory system would have achieved it. RECLAIM inflated baselines and, allowed too many imported credits and exemptions to the cap. And the ETS’s over-allocation of permits to selected companies led to windfall profits for those companies, and few emission reductions. All three systems used a free (grandfathered) allocation. Carbon Share’s goal is to avoid those problems, and to allow for a more open market that returns revenues to people.

Some ways to avoid those problems are:

Some environmental groups would prefer using the auction revenues to fund public goods such as energy efficiency, renewable energy, R&D, green jobs,or other projects to reduce more greenhouse gases.  Although it sounds good, there are drawbacks to this approach, including:

Offsets are very different from permits. Unlike permits, which represent tons of emissions under the cap, offsets reduce emissions outside of the cap. Offsets often lack performance standards and accountability. The forestry sector can be problematic. What happens when trees planted burn in a forest fire? Are offsets refunded?  The Carbon Share Program deals in permits, not offsets.

Carbon Share Systems are being advocated across the world. Here are some examples of what is happening on the ground:

CapGlobalCarbon is the name of a new international citizen-led initiative for an upstream cap on carbon, an auction of permits, and return of the revenues back to everyone, globally.

Congress has considered climate legislation in recent years, and some bills have proposed returning significant revenues to households.

California groups are working to return revenues from the statewide carbon price back to people.

The Global Warming Solutions Act of 2006 (AB32) created a Cap & Trade system with a price on carbon, and some funds are returned back to households, but more could be!

An Oregon group, Our Climate conducted a campaign to implement Cap & Dividend at the state level. SB965 and HB3250 would set a fee on polluters and return the money to Oregonians as a $500 to $1,500 annual dividend.

In May 2017, Governor Terry McAuliffe released Executive Directive 11, tasking the Department of Environmental Quality to come up with a plan to cap carbon emissions and enable Virginia to trade carbon allowances across state lines.  Virginia will likely join the Regional Greenhouse Gas Initiative (RGGI), and there may be opportunity for public comment regarding the use of funds for dividends.

CarbonWA in the state of Washington sponsored a ballot measure (Initiative 732) in 2016 that would have used revenues from a carbon price to reduce taxes, similar to British Columbia’s revenue neutral carbon price.  The measure did not pass, but now Gov. Jay Inslee is considering a carbon tax proposal.

Vehicle Miles Traveled (VMT) is the next frontier for reducing the environmental impacts of transportation choices. The problem with funding highways with a gas tax 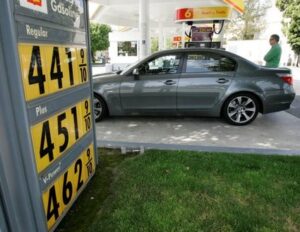 Author’s note: This article was published on the Feasta.org website on May 26. 2021. A recent cyberattack briefly shut down the Colonial Pipeline, a pipeline carrying transportation fuels

Author’s note: This article was originally posted at Feasta.org on June 9, 2021. Soon after I posted an article about a cyberattack on an oil and gas