The goal of Diet Share is to reduce the environmental impact livestock raised for meat has on the environment by setting a limit (or cap) on meat-based protein consumption within a jurisdiction.

Diet Share may also result in positive health outcomes in communities, and may be aligned with some goals of animal rights organizations.

Dear meat eaters: Don’t be alarmed. You can still eat meat. You will just have to pay an additional cost for the environmental impact that it is causing. We all have to work together to solve these large-scale, planetary problems. You don’t have to change your personal eating habits, but you will have to take responsibility for additional impacts if they are above the average amount in your jurisdiction, and your demand for this scarce resource will help contribute to solving these problems in an equitable way. 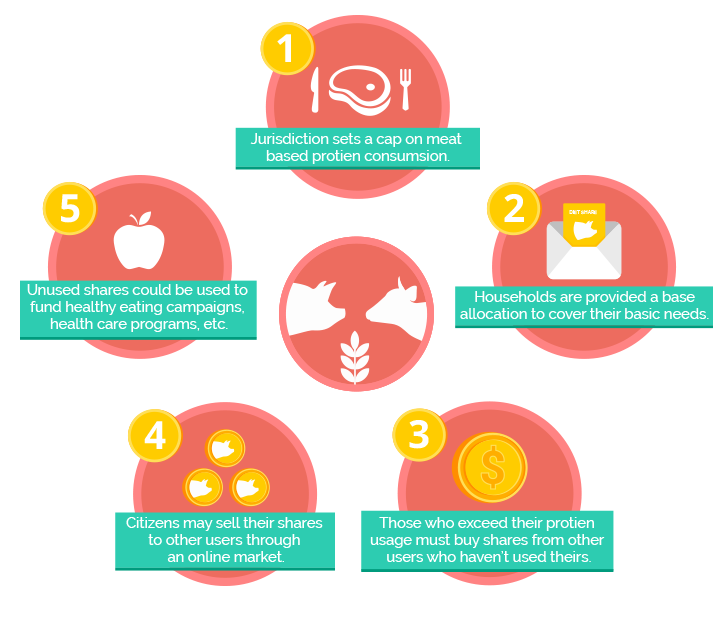 WHAT IS BEING REGULATED: MEAT CONSUMPTION

Diet Share sets an overall limit (or “cap”) on the consumption of meat-based protein within a jurisdiction. This creates a system for pricing meat consumption that internalizes the ecological and health costs of meat and allows residents to receive income from selling unused portions of their Diet Share to their neighbors. A Diet Share program can be implemented by local, state, or national governments.

HOW MEAT CONSUMPTION IS REGULATED AND CAPPED

Diet Share is a tradable “Cap & Share for Meat Consumption” program that can help jurisdictions reduce the amount of animal protein consumed, and assist in transitioning diets to more plant-based protein sources. The program is meant to assist jurisdictions in achieving reduction in per capita meat consumption. The program is sensitive to the personal choices, and traditional and religious customs regarding meat consumption, and is designed to be flexible, especially compared to an outright ban on animal-protein consumption. It cannot solve all other issues regarding the ethical issues of meat production or animal cruelty, but it can help educate households about the relative environmental impact of food choices, while providing economic incentives that support choosing plant-based protein consumption.

The principle behind Diet Share is that the resources for protein production are not valued correctly in the existing market system. The resources that go into food production are a commons that belongs to all of us, and if the supply of this commons becomes limited, then the value that accrues should be shared by everyone, equally. Diet Share treats the amount of animal-based protein as a limited global resource constrained by the climate impacts of meat production. This resource must be shared among the population equally, allowing people who eat less animal products to gain monetary compensation from others who desire more than their per capita share.

Households are provided a base allocation to cover their needs. Those who exceed their protein allocation must buy shares from those who use less.

As a baseline for discussion, Americans consumed almost 202 pounds of meat per person in 2014. Would your jurisdiction seek to reduce that amount by 10% in 10 years? 20%?

The average person in the industrialized world eats more than 176 lb. of meat annually, compared with around 66 lb. consumed by the average resident of the developing world.

Global average meat consumption is currently 100g per person per day, with about a ten-fold variation between high-consuming and low-consuming populations.

In 2015, there were about 30 million beef cows in the United States, and about 1.4 billion cows (including dairy cows) in the world.

All households would be provided a per capita allocation calculated by their jurisdiction’s declining amount under a “cap” divided by the population. The allocation could be denominated in grams or pounds, and reside on a debit card. The allocation could be used to purchase meat at supermarkets or other vendors. Jurisdictions would have to determine how to handle meat purchased at restaurants, or if fast food restaurants would be treated differently from sit down restaurants. Residents such as vegetarians who know they will not need their allocation could sell some or all of it to their neighbors via an electronic marketplace, which could be run by the local or state government, or by online companies set up for the purpose. At the end of the year, unused portions under the cap could be “retired” or used by local jurisdictions to fund healthy eating campaigns, health care programs, or other programs. The following year, the cap is reduced by a certain agreed-upon amount, and the process starts over.

According to recent studies: “Animal agriculture emits more (greenhouse gas emissions) than all transportation combined. Reducing demand for animal-based foods is essential if we are to limit global warming to 2C as agreed at COP21.”

Half of American adults have one or more preventable chronic diseases and over two-thirds of the adult population and one-third of children are overweight or obese.

Systems that add a price (or tax) to meat protein are being advocated across the world. Here are some examples of what is happening on the ground: 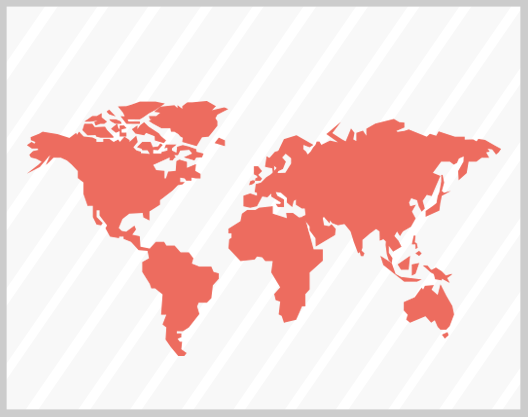 What is the future we need?